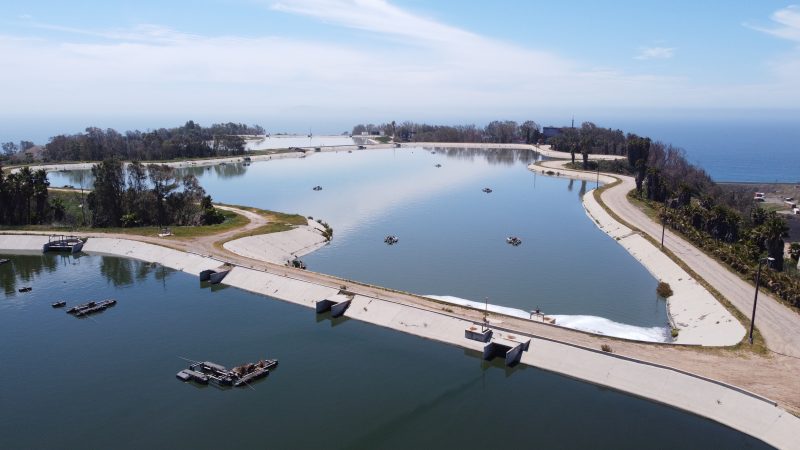 En los días siguientes estará disponible la traducción al español de esta nota.A giant pipe to the ocean is one of two main ways Tijuana sewage pollutes the coast. The other is the Tijuana River. These two spill points represent a choice regulators must make soon: Tackle the cause of the problem in Mexico, or its impacts in Southern California. Or somehow do both.

If the San Diego-Tijuana region were a human body, it’d have the stomach flu: Bad stuff is coming out of both ends. But instead of tackling the complicated source of the infection, the border towns are fighting over where to put a Band-Aid.

The ponds are supposed to be a functioning component of a wastewater treatment plant called Punta Bandera run by the state of Baja California’s water department, commonly called CESPT. But the aeration and treatment machines floating atop the stagnant water (emitting a stench so strong even mouth breathing cannot resolve) sit dead.

Travel two miles south of Punta Bandera and you’ll find a great concrete pipe draining that poo water straight into the Pacific Ocean next to a huge luxury condominium complex. The source of this waste is Tijuana municipal sewage that’s pumped – when the pump is working – away from the border.

Punta Bandera’s pipe to the ocean is one of two main ways Tijuana sewage pollutes the North American coast. The other is more famous: the Tijuana River, which picks up Mexican sewage before it empties into the ocean on the U.S. side of the border just south of Imperial Beach.

These two ocean spill points represent a choice the U.S. Environmental Protection Agency is going to have to make soon: Tackle the cause of the problem in Mexico, or the effect at the polluted Southern California coast. Or somehow do both.

The EPA commissioned researchers at Scripps Institution of Oceanography to study which spill point is the biggest problem for San Diego. The answer is, they both are. But Punta Bandera is definitely a huge source especially in touristy summertime when north-flowing ocean currents and swells carry the sewage all the way to Coronado.

“Our overall conclusion is that, for the entire year, reducing (flows at) Punta Bandera substantially gives you the best and most dramatic effects,” said Falk Feddersen, an oceanographer and researcher on the study.

There’s a caveat to the research, Feddersen pointed out. The study used data from 2017, an abnormal year when there was a huge break in Tijuana’s sewer system. And in the last few years, Imperial Beach has seen a lot more water coming from the river in the summer, when it’s supposed to be dry.

Now there’s real money on the table to do something: $300 million, designated by Congress for the issue. The problem is that U.S. local governments want the money to be spent on their side. But Mexico needs much more help.

While Mexican officials have said they are trying to fix the sewage problem on their own, they would like the EPA to consider supporting an element of their plan, which is collecting some of the water and sewage river runoff, treating it naturally by filtering it through the ground, and diverting it to a dam so it could be reused.

¨We have been talking often where it would be the best project to invest,¨ Faz said. ¨(Groundwater) is one of the projects (U.S. officials) are interested in the most because that gives you long-term certainty of the availability of water in Tijuana.”

Tomas Torres, director of EPA’s southwestern water division, said the agency “fully supports all those ideas to reuse” Tijuana’s wastewater and that the EPA has talked with Mexico about it for decades.

The challenge is securing the money to make it a reality, he said. Baja would have to borrow money to build anything – and that likely means rate increases for Tijuanan residents to support that debt.

Torres said while the agency’s basic goal with the $300 million is to reduce sewage flows on the U.S. side, it is also weighing how much that project would reduce sewage flowing into the ocean from Punta Bandera.

“It’s super important,” Torres said. “If we just fix the Tijuana River, we’re going to find there are impacts to Imperial Beach that are also coming from the coast. … We don’t want to look at just one piece of the puzzle, we want to look at both.”

In a March 15 letter to the EPA, Southern California governments (including mayors from Imperial Beach, San Diego, leaders at the county, port and regional water quality board) stressed that they want a bigger wastewater treatment plant built on the U.S. side, where they can control the infrastructure. They’re concerned EPA is prioritizing projects that enhance Mexico’s systems and reduce sewage to Punta Bandera “rather than the protection of water quality within California’s Tijuana River Valley,” according to the letter.

“Clearly (Punta Bandera) is an issue, but the issue we want to deal with first is the Tijuana River,” said Chris Helmer, Imperial Beach’s environmental and natural resources director.

It’s clear U.S. local governments bear entrenched mistrust in Mexico’s government – which is often blighted by corruption and constantly recycling administrative personnel – to take care of its sewer system. And Mexico is ultimately a poorer country with less capacity to tax its residents. There’s never enough money to do all the work necessary to bring Tijuana’s aged, broken and under-sized sewage system up to date.

But the EPA is also weighing the fact that it’s easier to build infrastructure in Mexico. Labor, materials, energy and procedural costs are all lower.

“Our approach has been, let’s address the problem at the source because it’s cheaper,” Torres said. “But over the past 10 years, we have also learned that when you don’t maintain these systems properly, they fall apart very quickly. And the reliability and commitment to do so is not where we think it can be.”

Torres said EPA officials are talking with Mexico’s federal government to try and nail down the country’s plans at this part of the border.

“They are a big source of the funding as well,” Torres said.

This story was supported by the Pulitzer Center and The Water Desk at the University of Colorado, Boulder.